NAPE’s roots came from a group of dedicated state sex equity coordinators who, in 1979, formed a committee to sponsor an annual national sex equity conference. This conference was attended by coordinators nationwide and received recognition for the quality of its program and professional development. Marie Mayor from Maryland, Mary Anne Etu from New York, and Barb Bitters from Wisconsin ran the earliest conferences. Mary Anne explained, “We planned the conferences in the back of the car while we traveled together.” As the conference grew, the Vocational Education Equity Council (VEEC; an affiliate organization of the American Vocational Association now known as the Career and Technical Education Council) took over responsibility for its coordination.

In 1989, in response to the states’ need for support in carrying out the vocational equity duties prescribed in federal legislation, Charlotte Gore (Florida) proposed to VEEC the concept of a consortium of states dedicated to the promotion of equity in vocational education. The VEEC executive officers realized that this alliance could provide leadership development and legislative advocacy during a time when it was so urgently needed. Charlotte, with the VEEC executive committee leadership, formed the National Alliance for Partnerships in Equity (NAPE). The first plans for NAPE were presented to the VEEC membership during the FY1990 AVA (now ACTE) national conference and to the state sex equity administrators during the Professional Development Institute.

NAPE was first housed at The Ohio State University with the National Center for Research in Vocational Education. OSU’s staff wrote the organization’s newsletters, assisted in the development of white papers, coordinated a performance standards project, and organized the Professional Development Institute.

In 1993, NAPE became independent and began the process of incorporating and obtaining its nonprofit status. In July of that year, Abigail Slayton (then consultant to the California Department of Education’s Office of Gender Equity) and Shirley Haggard (former Mississippi Department of Education’s Equity Coordinator) were appointed as co-directors responsible for conducting NAPE’s activities. During their tenure, membership grew to more than 25 states. NAPE moved to the offices of Brustein & Manasevit in Washington, D.C., in the spring of 1995, and Mimi Lufkin, of Lufkin & Associates, served as an administrative consultant.

In the spring of 2000, Mimi Lufkin was appointed executive director of NAPE, and NAPE’s national office was moved from Washington, D.C., to southeastern Pennsylvania, where it remains today.

Equity Pioneers: The Sex Equity Coordinators from 1976 to 1998 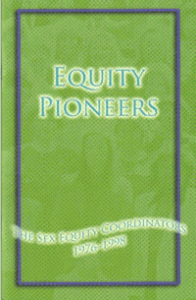 This excellent, historical resource book represents an attempt to capture the history of the sex equity coordinators (SECs) as they implemented the mandates of Perkins I and II, the federal laws funding vocational education from 1976 until 1998. The first position to be required by federal legislation, the SECs began with nothing more than a vague directive to “fix” sex discrimination and sex bias in vocational education. They were determined, courageous, innovative, assertive, and ultimately successful. Because of their efforts, old ideas about careers and gender were re-evaluated; old ideas about women and men in the workplace were examined; and old ideas about sex equity were replaced with common sense practices that benefited everyone. Because of their efforts, national alliances were formed, and strong networks across states flourished. Because of their efforts, thousands of women and girls and young men were given opportunities to follow their dreams and prepare for self-sustaining careers and occupations. The Sex Equity Coordinators changed the face of vocational education and made it a welcoming arena for all.

Contact the NAPE National Office for information about ordering.